Florence Nightingale "The Lady with the Lamp"


Florence Nightingale
"The Lady with the Lamp" Florence Nightingale was an important nurse that went to the Crimean War to nurse wounded soldiers. She and her nurses saved many lives and gave the nursery the importance it deserved.

When did she live?
Florence was born in 1820. This was ten years before Britain had its first steam passenger railway. She lived through the long reign of Queen Victoria. She died in 1910, after the age of electricity, cars and planes began.

A rich family
Florence's father was William Nightingale, a rich banker. William and his wife Fanny went to Italy after they married in 1818. Florence was born in Italy on 12th May. She was named after the city of Florence.

Florence's sister
Florence had an older sister, Frances Parthenope (known as 'Pop'). Pop was born in Italy too. The girls had lessons from their father. Florence was clever, and liked history and maths.

What did most women do?
In Victorian Britain, poor women worked as servants or in factories Rich girls like Florence were expected to marry and look after a home, perhaps doing charity work.

Why Florence did not marry
Florence was very religious. From the age of 16 she believed God wanted her to do important work. When she was 22, a young writer asked her to marry him. After seven years making up her mind, Florence said no.

Florence gets her way
In 1851, Florence went to Germany, to a Christian nursing school for women. She learned nursing for three months. It was hard work, but she loved it.

First job in a hospital
In 1853 a rich friend asked Florence to run a London hospital for 'Invalid Gentlewomen'. There was no pay, but Mr Nightingale gave her money. She made lots of useful changes in the hospital. At home, when her father and sister became ill, Florence nursed them.

Florence goes to war
Florence and 38 nurses arrived in Turkey in November 1854. 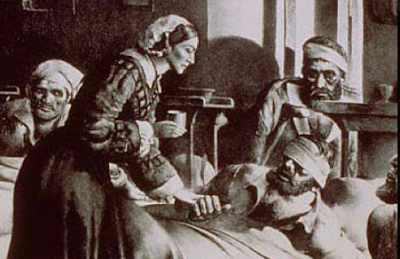 The horrible hospital
The hospital was overcrowded and filthy. There were not enough beds, so men lay on the floor. They were not washed. There were no proper toilets. Drains were blocked. Rats ran everywhere. The smell was terrible.

Walking with her lamp
At night Florence walked around the wards to make sure the men were comfortable. She sat with dying soldiers. She wrote letters home for men who could not write. She carried a lantern, so the soldiers called her 'The Lady with the Lamp'. When Florence came home in 1856, people called her a heroine. Later Florence met Queen Victoria. She told the Queen what was wrong with Army hospitals. She wrote another important people in that time to solve the problem.  Here on the right there is a letter from Florence Nightingale to the Duke of Westminster about the importance of nurses


In 1860 the Nightingale Training School for nurses was opened at St Thomas's Hospital in London.
Florence's book Notes for Nursing helped many student nurses.

Florence worked so hard she became ill. For the last 40 years of her life she stayed in bed most of the time. But she went on writing letters, collecting facts and figures. In 1907 she was awarded The Order of Merit. She was the first woman to receive this honour. Florence Nightingale died on 13th August 1910.