The House of the Royal Weight of Chavez Cardenas

The house is located in the Main Square near the old town hall, next to the palace of the Conquest and the Royal Prison.
I would like to explain this monument because it was a very important building in the Middle Ages and it has a typical medieval architecture.
This building belonged to the Chávez-Cárdenas family and it was built in the XVIth century. It is famous because it was the ancient house of weight and the most common cereals were wheat, barley, corn and so on.
The reason for its location is that the weekly market took place in the Main Square.
Nowadays, we can’t find the original constructions because in the XVIIth century it was modified.
The most representative architectural elements are: two twisted solomonic columns capped with two gothic pinnacles. It also has gothic Isabelline windows and a balcony with graceful corbels, that are typical in the Moorish epoch.
It is believed that Felipe II slept in this house instead of sleeping in the house of Chains.


Its interior cannot be visited, we can only admire the façade. 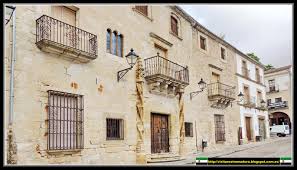 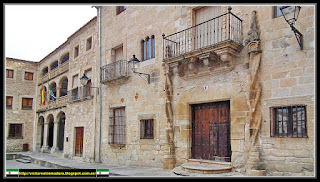